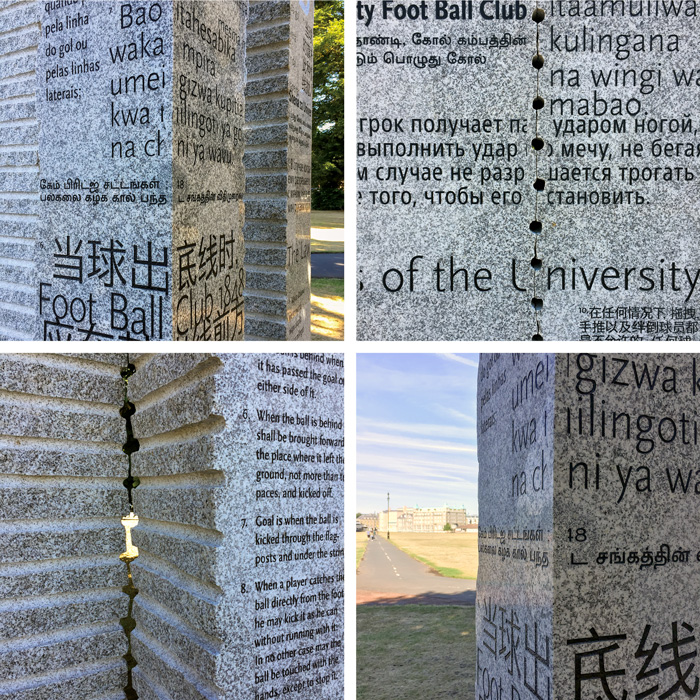 For updates on this commission visit www.cambridgerules1848.com

Cambridge City Council and the Cambridge Rules 1848 project are delighted to announce that the eagerly-awaited sculptural piece marking the birthplace of football as we know it today will be unveiled at Parker’s Piece on Saturday 12th May.

The sculpture – which is inscribed with the original Cambridge Rules in many different languages – will be officially revealed by Executive Councillor Anna Smith at noon on the corner of Parker’s Piece by Parkside and Mill Road. It’s part of an exciting day of celebrations on Parker’s Piece  which will also include two ‘town vs gown’ football matches organised in association with Cambridge United Football Club and Community Trust, featuring women’s teams from Cambridge United and the University of Cambridge and a men’s match between a Cambridgeshire FA Select XI and the University of Cambridge.

There will also be a commemorative newspaper telling the story of the commission and some large-scale photography documenting football from around the world installed on Parker’s Piece for one day only, supported by Cambridge Rules 1848’s Global Partners Street Child United and Shanghai Greenland Shenhua Football Club.

Cambridge Rules 1848 is a public art commission from Cambridge City Council celebrating how a simple set of rules written by university students for a game of football played on a patch of ground in Cambridge 170 years ago has grown into a worldwide phenomena embraced by diverse cultures across the globe.

The four large etched stone columns will be installed in May, while the others travel to countries across the planet including Brazil, Kenya, China, India and Egypt in a cultural exchange.

Artists Alan Ward and Neville Gabie were commissioned in 2014, and have been working on the project ever since – not just to create the sculptural piece but also develop an online archive of stories from football fans at cambridgerules1848.com
It’s become a unique insight into what football means to the masses and how it has become the world’s favourite sport.

“Through this commission, we’ve come across everyone from Porto fans in a Portuguese quarry and futsal players based in a Brazilian favela to Galatasaray fans in a Cambridge school,” said the artists. “All of them represent what this fabulous commission has been about – celebrating Cambridge’s crucial role in the global spread of the game.”

“The sculptural piece will be a permanent reminder of the importance of Parker’s Piece to football’s story – but we’re also really pleased that people around the world will also be able to understand just how important Cambridge is to the game they love.”

Our partners:
Cambridge City Council  |  2013 marked the 150th anniversary of the Football Association Rules and Cambridge City Council sought to commission an artist to make a proposal for an artwork, which celebrates the ‘Cambridge Rules’ and acknowledges the important role that these Rules played in establishing the Football Association Rules in 1863. It was also important that this commission signified the importance of Parker’s Piece as the birth place of football not only within the City of Cambridge, but both nationally and internationally.

National Football Museum  |  The National Football Museum in Manchester explores how and why football has become both ‘the people’s game’ and a key part of England’s heritage and way of life. It also aims to explain why England is the home of football, the birthplace of the world’s most popular sport. NFM is delighted to be supporting this innovative commission around the first written rules of the game. 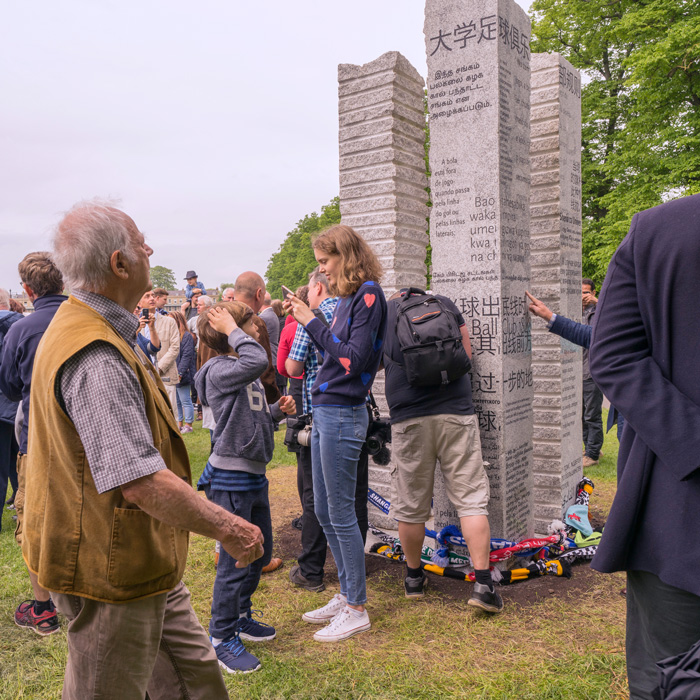